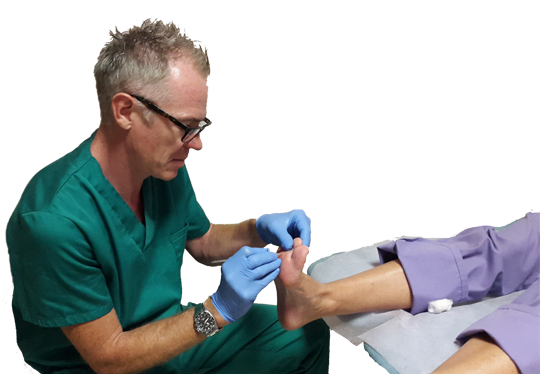 Qualified at the University of Westminster in 1994 with a 2.1 Bachelor of science in Podiatric Medicine.

On leaving University Philip worked as a locum covering clinics all over London before securing a position based at Willesden Community Hospital. Although hospital based the position involved working in various community clinics over Northwest London and being part of the Diabetic team based at Central Middlesex Hospital doing diabetic assessment and wound care.

In 1999 Philip became biomechanics and team lead for the Willesden area.

In 2001 Philip took a position in a private practice in Bermuda in charge of biomechanics and sports injuries although still practicing all areas of Podiatry.

Moved to Spain in 2007, registered Spanish podiatrist Colegio No 2524, Philip now works in five clinics around the Costa Blanca area.

We use cookies on our website to give you the most relevant experience by remembering your preferences and repeat visits. By clicking “Accept”, you consent to the use of ALL the cookies.
REJECTCookie settingsACCEPT
Cookies

This website uses cookies to improve your experience while you navigate through the website. Out of these, the cookies that are categorized as necessary are stored on your browser as they are essential for the working of basic functionalities of the website. We also use third-party cookies that help us analyze and understand how you use this website. These cookies will be stored in your browser only with your consent. You also have the option to opt-out of these cookies. But opting out of some of these cookies may affect your browsing experience.

Read More
Necessary Always Enabled
Necessary cookies are absolutely essential for the website to function properly. This category only includes cookies that ensures basic functionalities and security features of the website. These cookies do not store any personal information.
Non-necessary
Any cookies that may not be particularly necessary for the website to function and is used specifically to collect user personal data via analytics, ads, other embedded contents are termed as non-necessary cookies. It is mandatory to procure user consent prior to running these cookies on your website.
SAVE & ACCEPT